So, last Thursday, I posted a blog post about the new Nuzzel iPad app, saying that this update (to the already existing iPhone app) and various feedback from famous writers made me rethink a bit my work-flow. So here I am, more than a week after.

So, first, I have to make a huge disclaimer before beginning to talk about my experience : things didn’t go as I would have expected.

To begin with, I’m beginning the last month of my semester, which implies an increasing amount of work that I have to tackle every day. This is something that impedes me to write and read as much as I want to. But everything should be okay after the exams, mid-December.

Then, I had some problems with my credit card, who was refusing all my online payments and, thus, my Ars Premier subscription, which, therefore, truncated all my RSS feed, making it a pain to read (even if Ars implementation of RSS is better than most of news’ websites), and discouraged me a bit to take time to read it all. Everything should be fine tomorrow (and I learned that my MasterCard had a threshold on the amount of payments that I make online. This is nuts.)

And I kept the best part for the end : Tuesday, I thought that it would be a good idea to make an Mac OS X virtual machine on my PC, a kinda half-backed Hackintosh. I did succeed to make a pretty good Mavericks install on VirtualBox, but I came to a conclusion that my laptop wasn’t the best computer to do a Hackintosh : I have a 1336x768 resolution screen, and my graphics card -a GeForce 610M- isn’t recognized by Mac OS, making the interface a little bit too much sluggish to be used properly. But the damage was done, and I lost two days in this project (it was kinda fun); and I didn’t even succeeded to update the thing to Yosemite (I have trouble to make VirtualBox boot from an USB, if anyone have some tip, it would be great!).

Keep it simple and useful.

But all of this doesn’t mean that I didn’t used Nuzzel or my RSS reader at all during this week. Nuzzel even proved itself very helpful in one case : it sent me an alert for Tim Cook’s coming out, because 5 of my followers twitted about it. I was delighted when I saw the notification, but the killer feature was this : 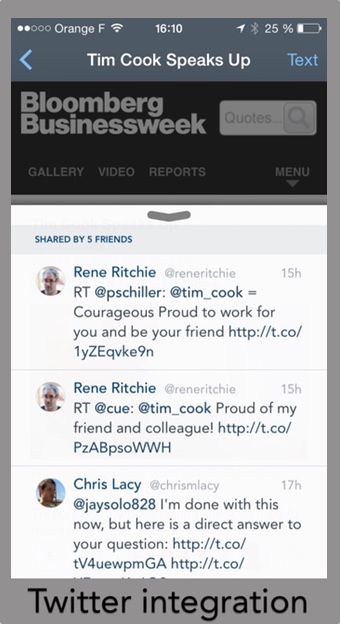 Instead of putting this article in my Instapaper queue, giving the link some context gave me the ability to see if it was relevant or not (in this case, it was). Amazing feature.

Clearly, I would have missed this article if I didn’t used Nuzzel at this time. It would have lost itself in my RSS queue until I took some actions to read it, even if it was relayed by most of the Apple bloggers that I have subscribed to. So you can imagine if it was a more low-key publication put on Twitter by a handful of people when I wasn’t connected? I would have missed it. So the app finds itself quite useful.